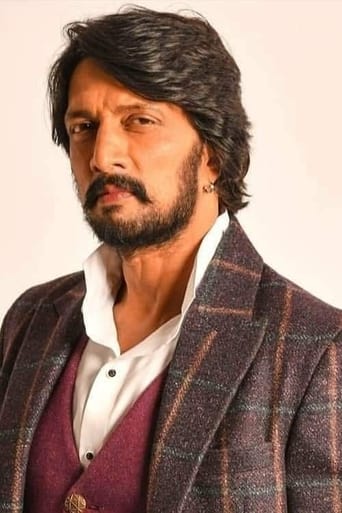 Sudeep (popularly also called Kiccha Sudeep) is an actor, director, producer and singer, who hails from from Shimoga, Karnataka. He stars primarily in Kannada films and is well-known in Sandalwood, Tollywood and Bollywood. He is known for his roles in the Kannada films My Autograph, Huchha, Mussanje Maatu, Sparsha, Just Math Mathalli, Kempe Gowda andOnly Vishnuvardhana. He has won the Filmfare Award for Best Actor in Kannada for three consecutive years and also won KarnatakaState Award. He has also been awarded the entertainer of the year and Best actor for his movie Only Vishnuvardhana. He was a student of mechanical engineering from Dayananda Sagar College of Engineering. He is a University Cricket player and captain of Karnataka Bulldozers (owned by Ashok Kheny) in Celebrity Cricket League. He is married to Priya and has a daughter named Saanvi