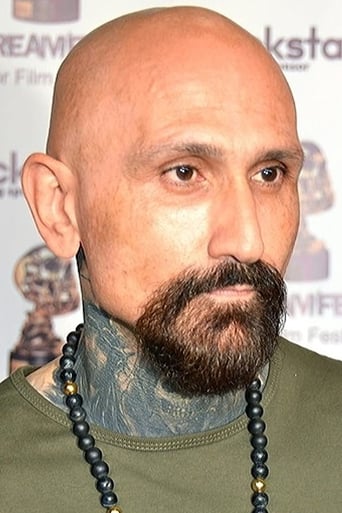 Robert LaSardo is an American actor. LaSardo was born in Brooklyn, New York. He began his career studying at the High School of Performing Arts in New York City where he became an honors student, before going on to the Stella Adler Studio of Acting. He spent four years in the U.S. Navy. For two of those years, he handled Navy attack dogs in the Aleutian Islands. Due to his work in the Navy, he supports USA Cares, an organization that supports families of soldiers. LaSardo started his acting career in 1987 with the independent film China Girl by Abel Ferrara. After several smaller roles he appeared in award winning TV series such as The X-Files, Nip/Tuck and CSI: Miami, most often playing the bad guy involved in drug dealing or even being the leader of a drug gang. He also played in several movies portraying similar ruthless characters, including blockbuster productions, such as Waterworld and The Mule with Clint Eastwood. In the last two decades he appeared often in independent horror movies, such as in The Human Centipede 3 (Final Sequence), Autopsy and Parlor (film) where he plays a tattoo artist in the lead role. LaSardo lives with his family on the West Coast in California. He's published several books, including his autobiography. Source: Article "Robert LaSardo" from Wikipedia in english, licensed under CC-BY-SA 3.0.