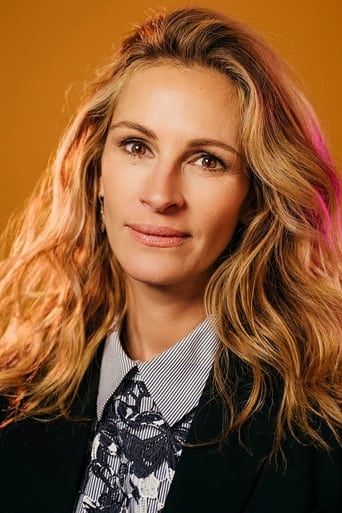 Julia Fiona Roberts was born on October 28, 1967 in Atlanta Georgia. Her brother Eric Roberts, sister Lisa Roberts Gillan and niece Emma Roberts, are also actors. She became a Hollywood star after headlining the 1990's romantic comedy Pretty Woman, which grossed $464 million worldwide. After receiving Academy Award nominations for Steel Magnolias in 1990 and Pretty Woman in 1991, she won the Academy Award for Best Actress in 2001 for her performance in Erin Brockovich.  Roberts made her first big screen appearance in the film Satisfaction, released on February 12, 1988. She had previously performed a small role opposite her brother, Eric, in Blood Red. Her first critical success with moviegoers was her performance in the independent film Mystic Pizza in 1988. The following year, she was featured in Steel Magnolias as a young bride with diabetes and got her first Academy Award nomination as Best Supporting Actress. Roberts became known to worldwide audiences when she co-starred with Richard Gere in Pretty Woman in 1990. The role also earned her a second Oscar nomination, this time as Best Actress. Her next box office success was the thriller Sleeping with the Enemy (1991). Also in 1991, She played Tinkerbell in Steven Spielberg's Hook and also played a nurse in the film Dying Young. This work was followed by a two-year hiatus, during which she made no films other than a cameo appearance in Robert Altman's The Player (1992). In 1993, she co-starred with Denzel Washington in The Pelican Brief, based on the John Grisham novel. In 1994, she starred in the comedy I Love Trouble and in the 1995 comedy-drama Something to Talk About. She then starred alongside Liam Neeson in the 1996 film Michael Collins. Robert’s next commercial and critical success was the film, My Best Friend's Wedding in 1997. She starred with Hugh Grant in the 1999 film Notting Hill. That same year, she also starred in Runaway Bride, her second film with Richard Gere. Also in 1999, she starred in the critically panned film Stepmom alongside Susan Sarandon. In 2001, Roberts received the Academy Award for Best Actress for her portrayal of Erin Brockovich. Later in 2001, she starred in the road gangster comedy The Mexican alongside her longtime friend Brad Pitt. She then starred in the romantic comedy America’s Sweethearts that same year. Roberts would team up with Erin Brockovich director Steven Soderbergh for three more films: Ocean's Eleven (2001), Full Frontal (2002), and Ocean's Twelve (2004). In 2003, Roberts was paid an unprecedented $25 million for her role in the film, Mona Lisa Smile. The following year, she starred alongside Clive Owen, Natalie Portman and Jude Law in the critically acclaimed film Closer (2004), based on the 1997 award winning play by Patrick Marber. Roberts had two films released in 2006, The Ant Bully and Charlotte's Web. Both films were animated features for which she provided voice acting. Also in 2006, Roberts made her Broadway debut as Nan in a revival of Richard Greenberg's 1997 play Three Days of Rain opposite Bradley Cooper and Paul Rudd. Her next film was Charlie Wilson's War, with Tom Hanks (2007) and in 2008; she starred alongside Ryan Reynolds and Willem Dafoe in Fireflies in the Garden, which was released at the Berlin International Film Festival. In her next film, Roberts again starred with Clive Owen in the comedy-thriller Duplicity for which she received her seventh Golden Globe nomination. In 2010, she appeared in the ensemble romantic comedy Valentine's Day, with Bradley Cooper, and starred in the film adaptation of Eat Pray Love. As of 2011, Roberts is set to star alongside Tom Hanks in comedy-drama Larry Crowne. In addition to acting, Roberts has brought to life some of the books from American Girl as films, serving as executive producer alongside her sister Lisa. Roberts had become one of the highest-paid actresses in the world, topping the Hollywood Reporter's annual "power list" of top-earning female stars from 2005 to 2006. As of 2010, Roberts's net worth was estimated to be $140 million. Roberts is married to cameraman Daniel Moder. Together they have three children.