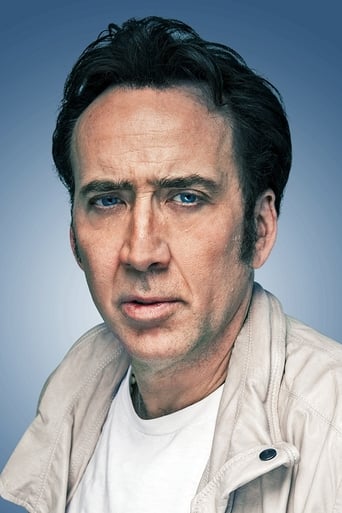 Nicolas Kim Coppola (born January 7, 1964), known professionally as Nicolas Cage, is an American actor, producer and director. He has performed in leading roles in a variety of films, ranging from romantic comedies and dramas to science fiction and action movies. Cage is known for his prolificacy, appearing in at least one film per year, nearly every year since 1980 (with the exception of 1985 and 1991). In the early years of his career, Cage starred in critically acclaimed films such as Valley Girl (1983), Racing with the Moon (1984), Birdy (1985), Peggy Sue Got Married (1986), Raising Arizona (1987), Moonstruck (1987), Vampire's Kiss (1989), Wild at Heart (1990), Honeymoon in Vegas (1992), and Red Rock West (1993). Cage received an Academy Award, a Golden Globe, and Screen Actors Guild Award for his performance as an alcoholic Hollywood writer in Leaving Las Vegas (1995) before coming to the attention of wider audiences with mainstream films such as The Rock (1996), Face/Off (1997), Con Air (1997), City of Angels (1998) and National Treasure (2004). He earned his second Academy Award nomination for his performance as Charlie and Donald Kaufman in Adaptation (2002). In 2002, he directed the film Sonny for which he was nominated for Grand Special Prize at Deauville Film Festival. Cage owns a production company Saturn Films and produced films such as Shadow of the Vampire (2000) and The Life of David Gale (2003). Though his performances in The Weather Man (2005), Lord of War (2005), The Bad Lieutenant: Port of Call New Orleans (2009), and Kick-Ass (2010) earned critical acclaim, and films such as Ghost Rider (2007) and Knowing (2009) were box office successes, Cage has been strongly criticized in recent years for his choice of roles, some of which have been universally panned. Most recently, he voiced the character of Grug in the animated film The Croods. He was born Nicolas Kim Coppola on January 7, 1964, in Long Beach, California, to parents August Floyd Coppola, a professor of literature, and Joy (Vogelsang), a dancer and choreographer. He was raised in a Catholic family. His father was of Italian descent and his mother is of German and Polish descent. His paternal grandparents were composer Carmine Coppola and actress Italia Pennino, and his paternal great-grandparents were immigrants from Bernalda, Basilicata, Italy. Through his father, Cage is the nephew of director Francis Ford Coppola and of actress Talia Shire, and the cousin of directors Roman Coppola and Sofia Coppola, film producer Gian-Carlo Coppola, and actors Robert Carmine and Jason Schwartzman. Cage's two brothers are New York radio personality Marc "The Cope" Coppola and director Christopher Coppola. He attended Beverly Hills High School, which is known for its many alumni who became entertainers. He aspired to act from an early age and also attended UCLA School of Theater, Film and Television. His first non-cinematic acting experience was in a school production of Golden Boy. Description above from the Wikipedia article Nicolas Cage, licensed under CC-BY-SA, full list of contributors on Wikipedia.